Voyager Travel and Lifestyle Holiday under the spotlight in Swedish blog.

Posted on February 13, 2013 by mindtimeshare 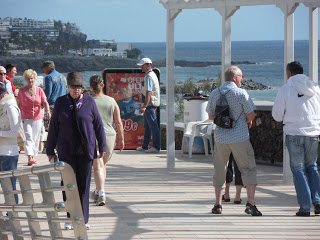 Yet again Voyager Travel and Lifestyle Holidays is brought to the attention of Holiday Makers in Gran Canaria due to their activities on the streets and presentations at the Club Puerto Atlántico.

As you can see these companies not only target British Holiday Makers in the Canary Islands but also other nationalities such as Dutch, Swedish and Norwegian.

We found a recent article on the web where it is explained in detail what happened to some holiday makers that were stopped on the streets of the Playa del Inglés in Gran Canaria.

Although the blog article is in Swedish, we really feel it is important for all consumers to be aware of this and even the translated version is understandable and complete.

The blog article can be found on the following link:

Typical approach of young people who appear to be working for the Tourist department, providing information about the area and handing over scratch cards for a prize draw. Guess what, they had the main prize and the only thing the Holiday makers needed to do was go and pick it up…

For several years now, employees or the so called OPC’s from the group of companies Day International Marketing SL, Wunschurlaub SL, Lifestyle Holidays and several others, are day in day out talking to consumers in order to sell their product called Voyager Travel, pretending to be employed by the Gran Canaria Tourism Office!

These OPC’s are mainly situated in the areas with most tourism such as The Playa del Inglés and Puerto Rico, and they “harass” the tourists on the streets telling them they are doing a questionnaire from the Tourism Office and promoting the tourism in the area

Unfortunately a lot of consumers know now that it isn’t just a case of picking up the prize and after hours of sitting through sales pitches a lot of people ended up signing an agreement for Voyager Travel / lifestyle Holidays without knowing what it was actually about..

On the Mindtimeshare blog we have also articles in English about British tourists who went through this and you can read this article on the following link: http://wp.me/p1kmoi-jK

If you have gone through a similar experience as described above then please let us know.

You can email us at customercare@mindtimeshare.com or place a comment on the blog.

Mindtimeshare SLU is registered Company reg number: B35957182 Mindtimeshare provides assistance to timeshare owners who have been defrauded by holiday clubs and bogus resale companies. The Mindtimeshare project was launched in February 2011. After dealing with timeshare members over several years who had been defrauded by numerous bogus companies and for large amounts of money, I considered launching an Organisation to help timeshare owners that have been targeted by bogus companies. On this blog you can find information about the different active scam companies and their “modus operandi” and also place comments, ask questions and see comments from other consumers who have the same doubts or have been through the same experience. Mindtimeshare has resulted in a huge success and has received the back up from not only timeshare consumers but also from the professionals in the timeshare Industry. Mindtimeshare helps timeshare owners who have been scammed by bogus Discount Holiday Clubs; bogus cash back companies; fraudulent timeshare resale companies; bogus class action companies and false lawyers and notaries. We offer professional answers and advice to Timeshare users. If you want to send an email instead of posting a comment on the blog please do so by emailing: customercare@mindtimeshare.com
View all posts by mindtimeshare →
This entry was posted in Bogus Holiday Clubs, Canary Islands, Swedish, Warnings and tagged Eugen Kaiser, Gran Canaria, Lifestyle, OPC, Prize, reclaimgc, Voyager Travel. Bookmark the permalink.

3 Responses to Voyager Travel and Lifestyle Holiday under the spotlight in Swedish blog.