Have you been asked for taxes through the Suprema Tribunal Justiça from Portugal? 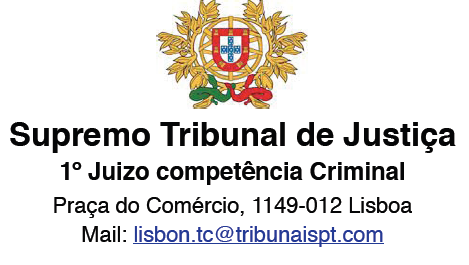 Recently we are receiving a lot of inquiries from Timeshare owners, who after dealing with dubious resale companies are now approached by the supposed Supreme Court in Portugal.

That is Suprema Tribunal Justiça in Portuguese.

A cold call from a person claiming to be working for the Supreme Tribunal in Portugal, explains the dubious company they dealt with before has been taken to court in Portugal.

Money has been awarded to the victims of this company and these are now contacted by a “bilingual representative” in order to help them with the settlement of the taxes the timeshare owner is liable for.

The paperwork this company sends to the Timeshare owner is looking extremely “genuine” and can be very confusing for consumers.

They have used the logos of the real Supreme Court and stamps of supposed Court Houses.

The email comes from lisbon.tc@tribunaispt.com and is signed by a António Silva Henriques Gaspar with as title: Presidente do Supremo Tribunal de Justiça.

The address mentioned is actually the “real” address of the Supreme Court: Praça do Comércio, 1149-012 Lisboa, Portugal.

Please note that there has not been anything such as a court case against dubious resale or other timeshare related companies in Portugal. Neither has there been any money awarded to the victims.

As far as we know the Portuguese Tax Offices do not require payment through Money Gram to individuals either.

This whole set up looks very similar to the one called Portal da Financas about which we placed a warning not so long ago.

If you have been approached by Suprema Tribunal Justica for a Tax payment, then please let us know.

You can email us to customercare@mindtimeshare.com or place a comment on this blog.

Mindtimeshare SLU is registered Company reg number: B35957182 Mindtimeshare provides assistance to timeshare owners who have been defrauded by holiday clubs and bogus resale companies. The Mindtimeshare project was launched in February 2011. After dealing with timeshare members over several years who had been defrauded by numerous bogus companies and for large amounts of money, I considered launching an Organisation to help timeshare owners that have been targeted by bogus companies. On this blog you can find information about the different active scam companies and their “modus operandi” and also place comments, ask questions and see comments from other consumers who have the same doubts or have been through the same experience. Mindtimeshare has resulted in a huge success and has received the back up from not only timeshare consumers but also from the professionals in the timeshare Industry. Mindtimeshare helps timeshare owners who have been scammed by bogus Discount Holiday Clubs; bogus cash back companies; fraudulent timeshare resale companies; bogus class action companies and false lawyers and notaries. We offer professional answers and advice to Timeshare users. If you want to send an email instead of posting a comment on the blog please do so by emailing: customercare@mindtimeshare.com
View all posts by mindtimeshare →
This entry was posted in Legal Services, Mediation services, Warnings and tagged Portal da Financas, Portugal, Scam, Suprema Tribunal Justica, Tax payment, timeshare, Timeshare scam. Bookmark the permalink.

4 Responses to Have you been asked for taxes through the Suprema Tribunal Justiça from Portugal?