To claim or not to claim Chapter 3, The Spanish notary… 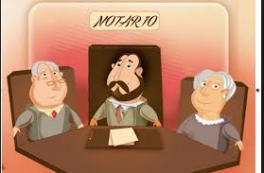 One of the most surprising stories we receive from consumers, who attended meetings in Spain, is about the notary they went to visit.

You might have received the same invitation already for the meeting in Spain to discuss the No win No fee claim, where the company will pay for your hotel and all you need to do is book your flights.

Many consumers fall for this, as after all they are going to spent 3 days on the sunny Costa del Sol, hotel paid for, what can they lose?

The reality is though slightly different as not many people are prepared for the long day that waits ahead of them.

During hours they are explained about the court claims, all the successes of the company, and how all timeshare resorts have mis sold the consumers. Then they also explain the additional services, the relinquishment or cancellation of the timeshare, which needs to be done the soonest the better as the resort will not allow the consumer to relinquish as soon as they notice they are going to claim.

Imagine the scenario here, the consumer is in a foreign country, picked up from the hotel and driven to an office about 30 – 40 minutes away from the hotel, bombarded for hours with facts and figures on claims and then presented with the additional services and the fact time is running out.

Then the consumer is presented with the fact that to act now, they have to go and visit the notary, who is yet again a drive of 40 minutes away, the offices are about to close, and you need to make a decision now…

We have heard of consumers who literally signed the agreement to take up the services, running from the offices to the car to get to the notary the soonest possible!

Here are some of the mentions we received from consumers about these meetings and the figure of the “Spanish Notary” that was thrown into the conversation:

“They said they had found a loophole that no notary was on our deeds which made our contract null & void & would allow them to get us out of our contract. As we did not want our children to be burdened with this expense. We were told several times that we should not divulge this information in Britain. We were told that we would have to submit the claim that day & have it officially signed & witnessed by a notary. Copies of our passports were taken, our original deeds for our timeshare kept & general information on our timeshare. To start the proceedings we would have to pay €2,000 & balance within 5 days by Bankers draft approx. €7,500 on our return to the UK. We paid the deposit by Debit card. We were then taken by car to the offices of the Notary they used in Fuengirola a D. XXXX to have our claim witnessed by him….”

“We were taken into Fuengirola to D XXXX Notario and he did a ES Copia Simple and we paid a deposit of 2000 euros on credit card. Foolishly we thought as the notary was involved all was above board – obviously not…”

“He explained the plan was to charge us £6,500K to “desist” -to get rid of our time-share by removing our names from the deeds via a notary in Spain…”

Please note that all you are signing at the Notary is a Power of Attorney. This Power of Attorney which is in Spanish and kindly translated by the person from the claims company into English there and then verbally, is all about the fact you are given this company the authorization to cancel your membership on your behalf.

The Power of Attorney does not mention any solicitor or procurator that will handle your supposed court claim.

The role of the notary is purely to certify that the person undersigning the document (the consumer) has been duly identified with a Passport or ID document, and is signing out of free will the authorization for the other person / company to act on their behalf in the stipulated matter, which is CANCELLATION OF THE TIMESHARE.

At NO point the notary is involved in this cancellation, or anything mentioned in the document. The notary is only a witness of the fact this person is signing this authorization!

Power of attorney’s in Spain such as the above-mentioned document cost around 100 euros.

So making believe the consumer that the notary is actually going to act on their behalf in the relinquishment procedure and the charge for this is around 2000 euros, seems to be far away from the truth!

Don’t let anybody rush you into signing an agreement!

For as much as everything sounds credible and people in suits are telling you they are legal advisers and Spanish notaries are going to handle your case…keep a clear mind and take your time to think things over.

For more information about claims against resorts go to our page about Claims and see if your purchase agreement indeed would qualify for a claim.  The link is https://wp.me/P1kmoi-3p2

Mindtimeshare SLU is registered Company reg number: B35957182 Mindtimeshare provides assistance to timeshare owners who have been defrauded by holiday clubs and bogus resale companies. The Mindtimeshare project was launched in February 2011. After dealing with timeshare members over several years who had been defrauded by numerous bogus companies and for large amounts of money, I considered launching an Organisation to help timeshare owners that have been targeted by bogus companies. On this blog you can find information about the different active scam companies and their “modus operandi” and also place comments, ask questions and see comments from other consumers who have the same doubts or have been through the same experience. Mindtimeshare has resulted in a huge success and has received the back up from not only timeshare consumers but also from the professionals in the timeshare Industry. Mindtimeshare helps timeshare owners who have been scammed by bogus Discount Holiday Clubs; bogus cash back companies; fraudulent timeshare resale companies; bogus class action companies and false lawyers and notaries. We offer professional answers and advice to Timeshare users. If you want to send an email instead of posting a comment on the blog please do so by emailing: customercare@mindtimeshare.com
View all posts by mindtimeshare →
This entry was posted in Bogus Holiday Clubs, Bogus resale companies, Canary Islands, Costa del Sol, Legal Services, Mediation services, Tenerife, Warnings and tagged Claims against resorts, Claims Companies, Claims meeting, Cold Callers, No Win no Fee Claim, Relinquishment services, Spanish court claims, Spanish legal Adviser, Spanish notary. Bookmark the permalink.

1 Response to To claim or not to claim Chapter 3, The Spanish notary…