Did you receive a call from the FAKE Grupo Logra about a Brexit Stamp?

Posted on November 16, 2021 by mindtimeshare 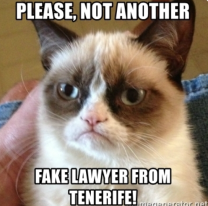 A recent cold caller has been spotted by the name of Grupo Logra.

There seems to be a real company with this name, but please note they have NOTHING to do with these cold callers who pretend to be lawyers in Tenerife.

The agent from this fake Grupo Logra contacts consumers to inform them about an awarded amount of money through the Santa Cruz Court in Tenerife.

To obtain this money, the consumer must pay an upfront fee of 680 euros to pay for a ‘Brexit Stamp’ which is needed in order to release the money.

Emails from this FAKE legal company are send out by somebody called Mariano Ramirez with email address grupologra@consultant.com

But the actual mail is signed by Mrs. Elizabeth Walker who has given herself the title of “Trustee”.

The email is full of “official” names of the people involved such as Mr. Allister Hillington from the Liaison office, one of the supposed lawyers: Mr. Alejandro Cabello and the supposed Senior Trustee Mrs. Charlotte Millington.

They complete the email with copies of documentation that has been copied from the internet and adjusted to the consumer.

Please be assured that this is a SCAM and in case you send them any money for the “Brexit Stamp” we are afraid you won’t see this money back.

If you have been approached by anybody from the fake Grupo Logra, or any other company with a similar story about money awarded through court and Brexit Stamps, do let us know.

Mindtimeshare SLU is registered Company reg number: B35957182 Mindtimeshare provides assistance to timeshare owners who have been defrauded by holiday clubs and bogus resale companies. The Mindtimeshare project was launched in February 2011. After dealing with timeshare members over several years who had been defrauded by numerous bogus companies and for large amounts of money, I considered launching an Organisation to help timeshare owners that have been targeted by bogus companies. On this blog you can find information about the different active scam companies and their “modus operandi” and also place comments, ask questions and see comments from other consumers who have the same doubts or have been through the same experience. Mindtimeshare has resulted in a huge success and has received the back up from not only timeshare consumers but also from the professionals in the timeshare Industry. Mindtimeshare helps timeshare owners who have been scammed by bogus Discount Holiday Clubs; bogus cash back companies; fraudulent timeshare resale companies; bogus class action companies and false lawyers and notaries. We offer professional answers and advice to Timeshare users. If you want to send an email instead of posting a comment on the blog please do so by emailing: customercare@mindtimeshare.com
View all posts by mindtimeshare →
This entry was posted in Canary Islands, Companies closed down, Fake lawyers Tenerife, Fake Lawyers Tenerife, fraud, Legal Services, Mediation services, Tenerife, Warnings and tagged Alejandro Cabello, Allister Hillington, Bogus Lawyer, Brexit stamp fee, Charlotte Millington, Elizabeth Walker, Fake lawyers Tenerife, fraud, Grupo Logra, Mariano Ramirez, Santa Cruz Court in Tenerife, Scam, Trustee. Bookmark the permalink.